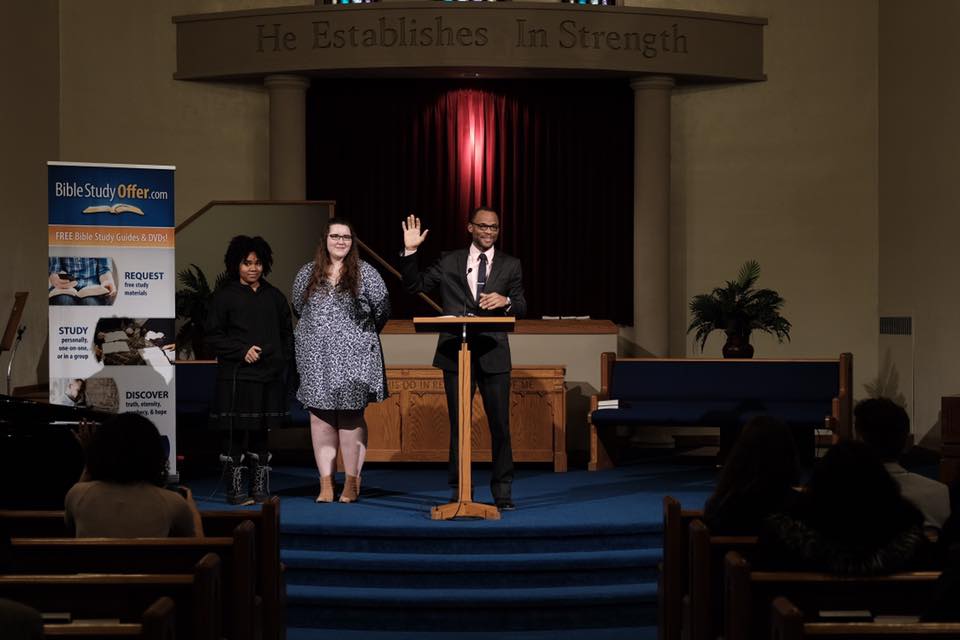 I was only 18 years old when I first heard about CAMPUS.  I was helping to lead a team of canvassers in Long Island, New York when I got an email regarding the program and made a decision to be a missionary on the concrete jungles of the University of Michigan.

That missionary year, I was able to witness the first baptism of public campus ministry — a neo-hippie that we made contact with while canvassing a coffee shop.  It was a powerful experience seeing the transformation of a girl from the time we knocked on her door to the time she gave her life to Christ through baptism.  The dreadlocks were cut off, empty piercings remained on ears, nose, and lips.  And she looked like a totally different person.  It was a total transformation.  The University of Michigan Adventist Students for Christ established themselves as an effective, soul-winning model in public campus ministries.

Since that first year in Ann Arbor, CAMPUS has experienced growth in many ways:

IT STARTED A CHURCH GROUP ON CAMPUS
Within the first year of its initiation, the vision of CAMPUS was to establish a church on the University of Michigan campus.  This would provide a place where students from a variety of cultures and backgrounds could unite under the banner of Scripture and the Christ of Scripture.  The radical idea that racism should not exist in the Adventist church service, no matter how sophisticated the reason for its existence, was a philosophy that students quickly rallied around.  When GYC was birthed through the CAMPUS movement, this was one of its original values.  A vibrant student-led church on the University of Michigan campus was started.  The congregation consisted of hispanic, white, black, asian, and other backgrounds.

IT MADE MISSIONARIES ON CAMPUS
Stephanie was part of the Missionary Training Program.  She had one goal that year: to lead her sister to baptism during her time as a missionary.  In 2004, in an outdoor hotel pool on a chilly Sacramento December, her goal became a reality.  Stephanie was a missionary that was sent to a public campus.  But James was a missionary that was sent from a campus.  The son of a Baptist minister, he had a football scholarship at his university.  James was led to Christ through the ministry of another missionary: Sebastien, who later became the Missionary Training Program Director.  Giving his life to Christ and being baptized as a Seventh-day Adventist, he quit playing football.  He also lost his scholarship.  Additionally, he had to pay back the university all the funds they invested in his college football career: tuition, housing, book fees, etc.  James enrolled in the Missionary Training Program.  When he finished he served as a Bible Worker for his local church.  Currently, he is a student leader at U of M and Eastern.

IT EXPANDED TO OTHER CAMPUSES IN MICHIGAN
In 2006 I received a call to start a campus ministry in the upper peninsula of Michigan.  Members of the Houghton Seventh-day Adventist Church had not seen college students attending their local congregation for years.  Through the grace of God, my first Sabbath there, I encountered Idaliza — a Biology student at Michigan Tech.  I asked her if she knew of other Adventists in the area and before the month was over, a critical mass had formed.  Among the people who emerged was Ed, a PhD student from Kenya.  His wife had vowed never to become an Adventist.  Idaliza was dating a young man who had made a similar commitment.  Realizing the perplexing situation they now found themselves in, they began to pray for wisdom.  Both of them asked their significant other to give Bible studies a chance and their partners agreed.  Now, Idaliza and Andy are leaders in their home church in Illinois and Ed and Mariann are members of a church near a college town in Kenya.  As a result of the campus ministry that was started in our small Houghton church, nine young leaders have emerged including four church elders, and two CAMPUS Missionaries.  That small local church has committed tens of thousands of dollars to campus ministries and leads the way among Michigan Adventist churches.

IT SENT MISSIONARIES FROM CAMPUS
Valmy was converted on a secular campus.  A victim of the Rwandan genocide, he lost nearly all of his family in the tragic event.  After giving his life to the Lord, he became a missionary.  Shortly after the completion of his missionary internship in 2006, Valmy, along with Nasi and Sikhu — other CAMPUS alumni helped to form an organization called Africans Living In View of Eternity.  Their mission was to return to Africa and to set it on fire for Christ.  They went to the toughest, unentered areas and began sharing the good news of Christ with the community.  The latest report has Valmy’s young niece Chantal preaching a series that baptized more than 80 people to the church.

IT GREW ITS TRAINING PROGRAMS
There is no such thing as stagnant success.  Some people wonder why the program has been somewhat changed.  Comfortably settling into a satisfaction with yesterday’s successes will not only lead to current failure, it is a direct contradiction to the very culture that CAMPUS has spread throughout the Adventist Church.  Excellence in all that we do calls for the constant fine-tuning and expansion of the vision that CAMPUS has.  By adding a new program and streamlining the one we created more than a decade ago, we make our evangelistic training more successful.  By training future pastors in our church, we take seriously our responsibility of empowering young people to impact the local congregation with the CAMPUS culture.

God has blessed us beyond our greatest expectations.  Like Psalm 126 says, “The Lord has done great things for us, whereof we are glad.”  Faithfulness to the mandate that God has given us; respect and appreciation for faithful supporters who sacrifice time, energy and resources for us to operate; and the times in which we live call us to consider the need to be more radical in our experience with Christ and His mission to reach the world.

Our greatest days and efforts are still to come as we realize more and more how true these words are: If it’s not radical, it’s not rational.

Israel Ramos is the CAMPUS Director.  In 1999 he was part of the inaugural class of Missionaries at the University of Michigan.  Five years later he became the third Missionary Training Program Director and the Director of Pastoral Care.  He is an ordained minister and has served as a pastor in a University Church, a missionary, and an administrator in public campus ministry for more than 15 years.