Inspired by an article on Thanksgiving, we wanted to ensure that this year’s holiday meal had more fresh foods, healthier portions, and non-traditional components that included our Mexican and Korean backgrounds.  We made three dishes: 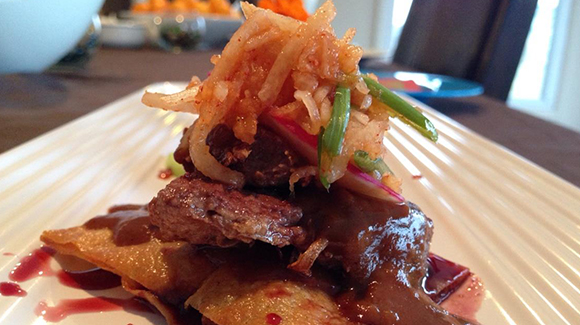 Mole
Growing up, Mole was one of my favorite mexican dishes.  It’s dark color, and earthy taste somehow reminds me of the Harvest Season.  I thought that pomegranate was a good fruit to use in a glaze for several reasons.  First, it reminded me of my childhood days when we used to eat them from my Aunt’s backyard tree.  Secondly, it has beautiful living color.  Lastly, it was a nice modern substitute for the more traditional Thanksgiving cranberry.  While visiting Dubai last year, I came across a small shop that sold saffron.  The nice aromatic effects of saffron blend very well with pomegranate and added a nice touch of class to the poor man’s chicken wings.

I’m a fan of kimchi.  It adds nice texture and freshness to heavy foods.  However, I don’t know how to make it; it takes a lot of time to make; and my friends who make kimchi were not in town.  One day, out of the blue, the thought occurred to me to fuse Mexican Jicama with Korean Kimchi.  Jicama is slightly sweet.  Mexicans usually eat it with salt, lime, and hot red pepper powder.  We made a quick variation of kimchi by dressing jicama and green onions in a spicy korean red paste. 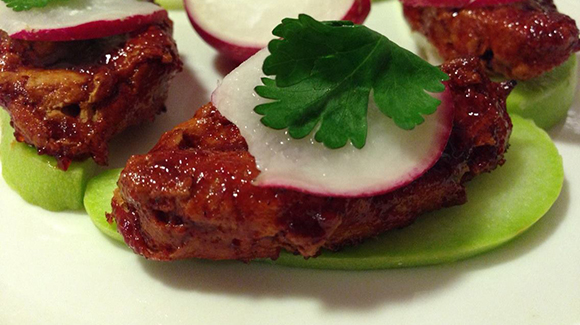 Korean BBQ
Korean BBQ Chicken Wings was what started off this whole idea of making an entire Thanksgiving dinner from chicken wings instead of Tofurkey.  KBBQ is a family favorite and we typically eat this dish at home with rice, and fresh veggies.  Not all KBBQ is spicy.  For Thanksgiving, however, we used the spicy sauce and balanced it out with Chayote.  Chayote is a mexican squash that can be eaten fresh or cooked.  Honestly, my brother and I both hated it while we were growing up.  But, especially when served raw, it is a nice counterbalance to spicy foods.  Also, its crisp texture goes well with cooked foods. 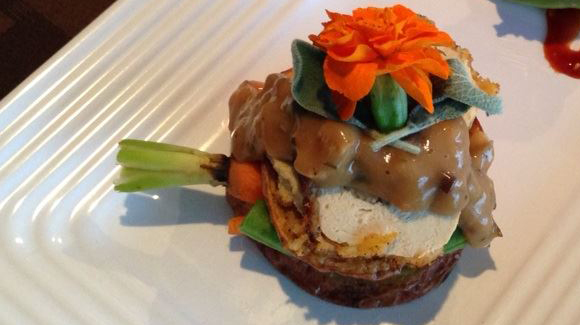 Turkey
Tradition is good.  We didn’t want to get rid of it completely.  So we brought back the mock turkey last-minute.  Originally, the idea was to use chicken wings but season them in a traditional style.  In the end, we just went completely traditional with the ingredients: potatoes, cranberry sauce, carrots and string beans, and stuffed “turkey”.

One of the things that I enjoyed the most about this Thanksgiving dinner was the fact that things were pretty easy to make and relatively quick — for a Thanksgiving meal.  Our family enjoyed a wonderful time with our CAMPUS Residents who were “on call” this weekend. 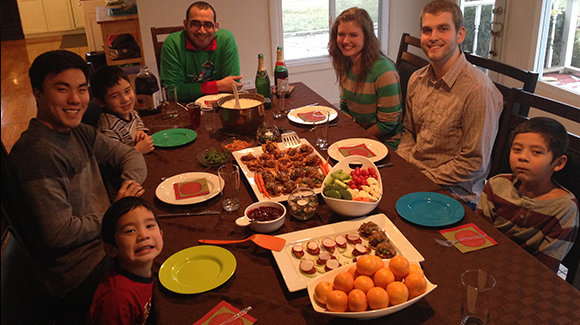